Silver Spray Cabin, how did we end up discovering this little slice of heaven?

A friend had been planning on coming up from the United States to go backpacking with us for months. He’d be here for a total of five days, and so I’d planned a route into the alpine of Stein Provincial Park. It was remote, wild, and knowing me, overly ambitious given our timeframe.

Then came the weather report; a month’s worth of rain was expected to fall in four days along most of the coast and lower mainland of British Columbia. Pemberton, the nearest town to Stein, was showing a 100% chance of rain with a high of 12°C; if it was going to be 12°C and raining in the valley, that likely meant below freezing and snowing at high elevations.

Huts! I was pouring over the map when I vaguely recalled seeing huts listed in a provincial park. Where was that now? Right, Kokanee Glacier Provincial Park. 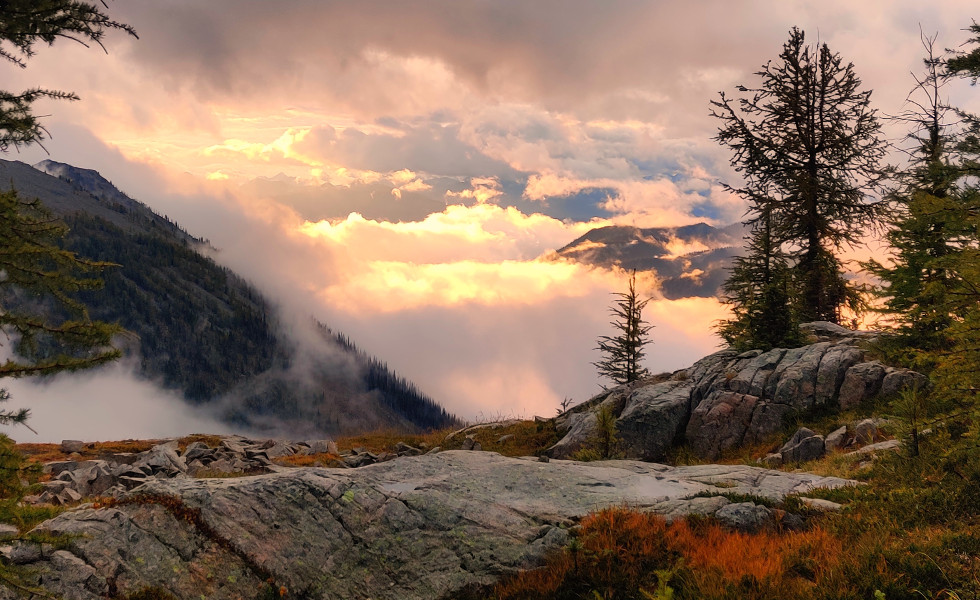 Sunrise from the hut.

Kokanee Glacier had been on my bucket list for some time (but my bucket list is awfully long.) It was the night before we were set to leave when I called the Alpine Club of Canada to see what, if anything, was available on such short notice. They just happened to have three spots left at the Silver Spray Cabin for two nights. The last three spots in the entire park! I immediately booked them.

For us, the drive was over six hours; the last bit of forest service road so gnarly it was only accessible with a high clearance 4×4. By the time we ‘d chicken wired the truck for porcupine prevention, got our packs on, and were ready to go, it was after 5 p.m.

The trail was listed as difficult; 7 kilometers (4.3 miles) with 1,100 meters (3,600 feet) of elevation gain. BC Parks and the Alpine Club suggested an estimated travel time of 4-6 hours. Even if we were in great shape, which we weren’t, we knew we would be hiking well after dark.

No matter, the moon was nearly full. Even with the ominous low hanging clouds hanging overhead, we would have some light to guide our way.

“For a brief moment, as the soft golden light of the autumn sunrise burst through the clouds and kissed the valley floor, I was enough just as I was.”

For the first kilometer, the trail was flat and easy to hike as it followed Woodbury Creek up the forested valley. We were happy for the easy start, even though it meant the climb would likely be steeper later.

Across a small bridge, the trail split; the left trail continued up the valley to the Woodbury Cabin, the right trail, our trail, climbed into the clouds towards Silver Spray Cabin.

Canada is a lot like New Zealand in that switchbacks aren’t really a thing. At least not the perfect, well-graded switchbacks that dominate many U.S. trails. The Silver Spray switchbacks were more like giant steep S-curves that slowly snaked their way up the mountainside.

Over half the trail wound through an old burn thick with huckleberries the size of grapes; we moved as fast as we could while shoveling fistful after fistful of huckleberries in our mouths.

“We’ll be hiking in the dark,” our friend said. I agreed. There was still a lot of elevation to gain between us and the cabin.

Halfway around the basin, my headlight came out. Then Carl’s. Our friend’s night vision was obviously way better than ours because he just kept on hiking in the dark.

My backcountry navigation app showed the trail to the hut continuing another kilometer and a half once we gained the ridgeline, so I was 100% sure Krav was joking when he rounded a corner and said, “We’re here.” My legs hurt, and I was tired. It wasn’t a good joke.

It turned out he was serious.

Exactly three hours after we’d started, we were sitting next to a warm fire in the beautiful, rustic Silver Spray Cabin, utterly oblivious to the slow, steady drizzle outside.

The original Silver Spray Cabin was built in 1910 for the miners working at the Violet Mine. It was replaced in 1994, by a cozier, more modern hut. Downstairs, a woodstove crackled, heating an open kitchen/dining room area. The upstairs loft had sleeping pads for ten, the maximum capacity for this particular hut.

As I cooked dinner on the propane stove, listening to the chatter and laughter of a full cabin behind me, I realized huts were my new favorite thing. 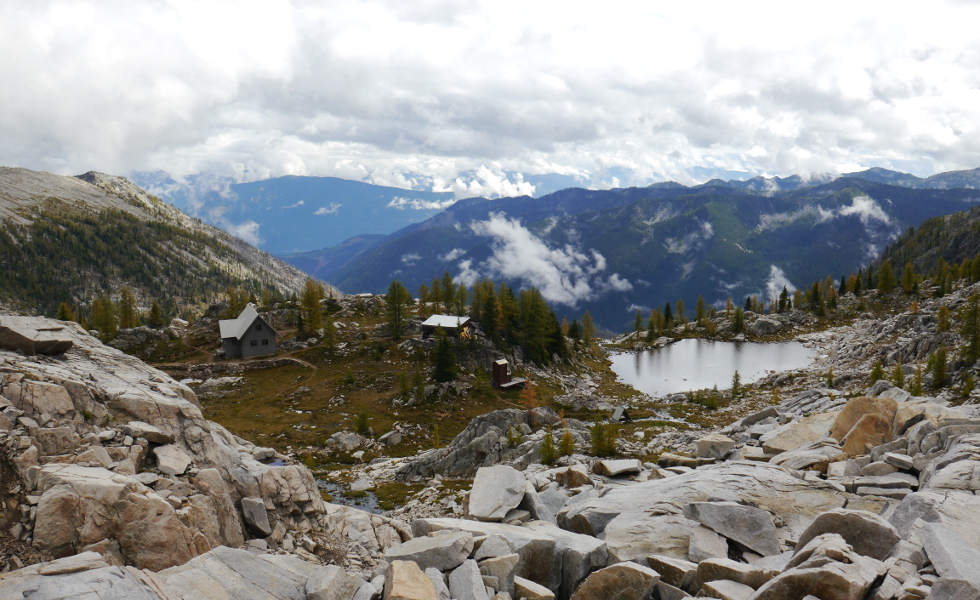 I awoke at 6:30 a.m. A half dozen backpackers were fast asleep on the floor around me. Downstairs, I could hear the German couple playing with their eight-month-old baby and chatting up the older gentleman that was up here with his son and his son’s friend.

I put on my down jacket and knit cap and headed downstairs. I said good morning, made myself a cup of coffee, and silently slipped out the door.

The air was crisp and fresh. At the moment, it was not raining. A low fog hung like a blanket over the little hut. I made my way around a shallow tarn, and back down the trail we’d hiked up in the dark the night before.

The sunrise, poking through the clouds, stopped me in my tracks. I sat.

It will never cease to amaze me how something as pure and simple as a sunrise can simultaneously make me feel a part of something so much bigger than myself, and yet make me so aware of how small and insignificant I am.

For a brief moment, as the soft golden light of the autumn sunrise burst through the clouds and kissed the valley floor, I was enough just as I was.

When the guys were up, and the rain had stopped, we took a hike up to the abandoned silver mine up on the pass behind the hut.

To the left of the hut, the mountains went on forever, but we went right, into a large bowl with steep talus walls.

Halfway to the mine, our friend decided he wanted to climb the nearly vertical ridge that connects Evening Star Peak and Mount McQuarrie. I took one look and thought, “Nah.” We wished him luck and continued up the faint trail.

The mine had collapsed in on itself, but the stacked rock entrance was still there, as were the steel tracks and an old ore cart. A rusty wheelbarrow and a handful of other relics littered the otherwise desolate landscape.

I sat down on a pile of old support beams and marveled at how tough and self-sufficient people used to be. I’m up here thinking, “I’m not taking my sleeping pad to a hut that probably has mats, it weighs like 14 ounces, and the trail is steep and my knees..wah wah wah.”

Meanwhile, back in the day, some badass was carrying a robust, fifty pound, metal wheelbarrow 50 kilometers from the nearest town so he could mine silver at 8,000 feet. Not to mention he built himself a house with a handful of nails and some logs he dragged up from somewhere below the treeline.

What happened to us?

Carl set up his camera to film the clouds as they worked their way over range after range of mountains. I played hide-and-seek with a pika. Off in the distance, I could hear the occasional rock slide as our buddy slowly picked his way up the ridge.

The sun sunk below the clouds, and a cold wind howled up the valley. It felt good knowing hot coffee, and a warm fire was waiting for us at the hut.

We may be wimps compared to the miners of yesteryear, but right then, I was surprisingly okay with that. 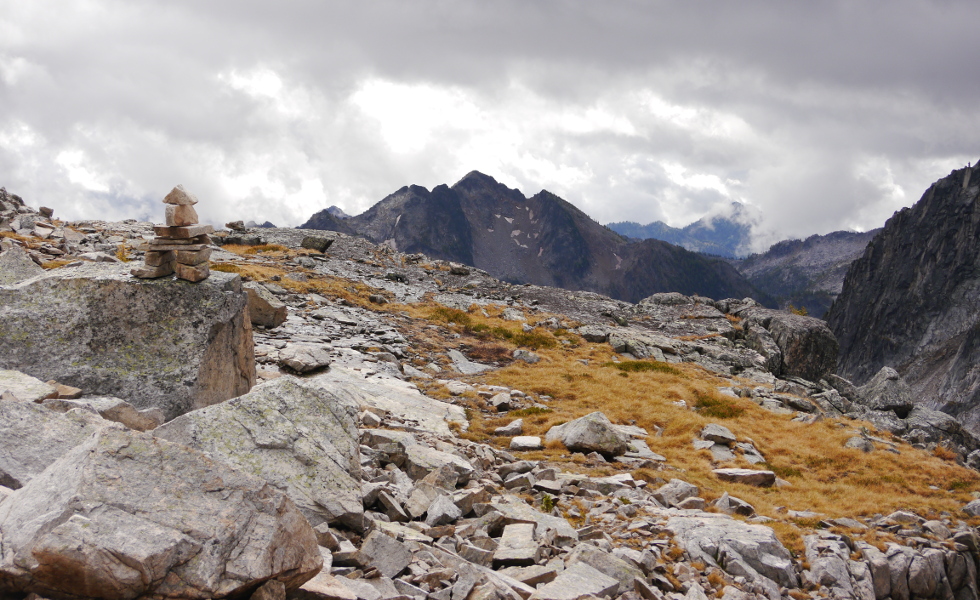 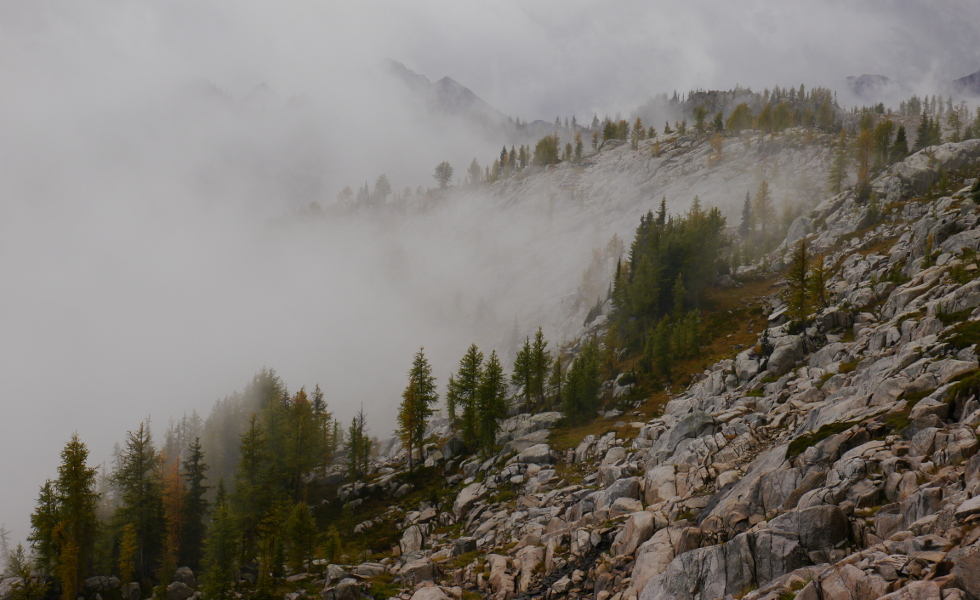 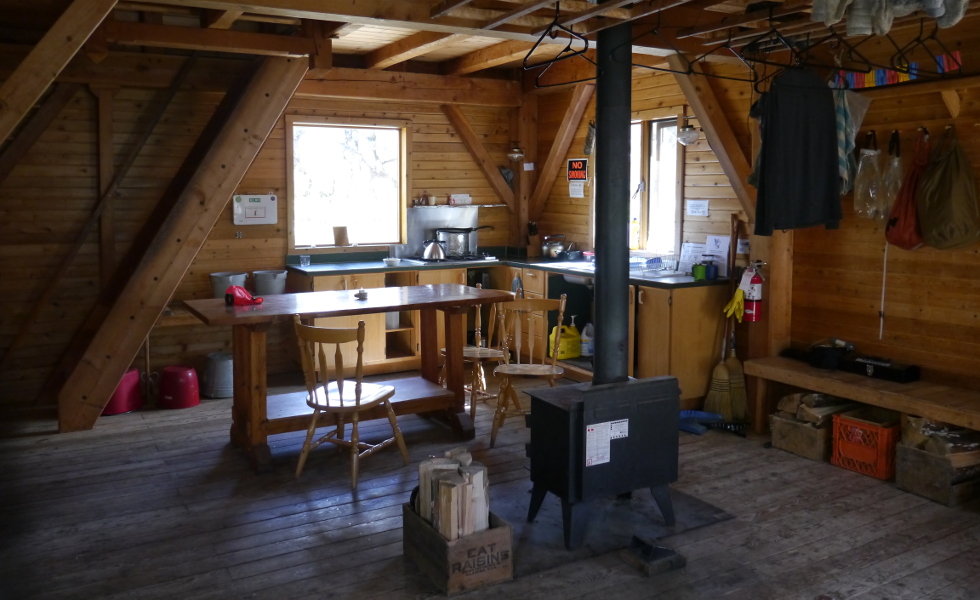 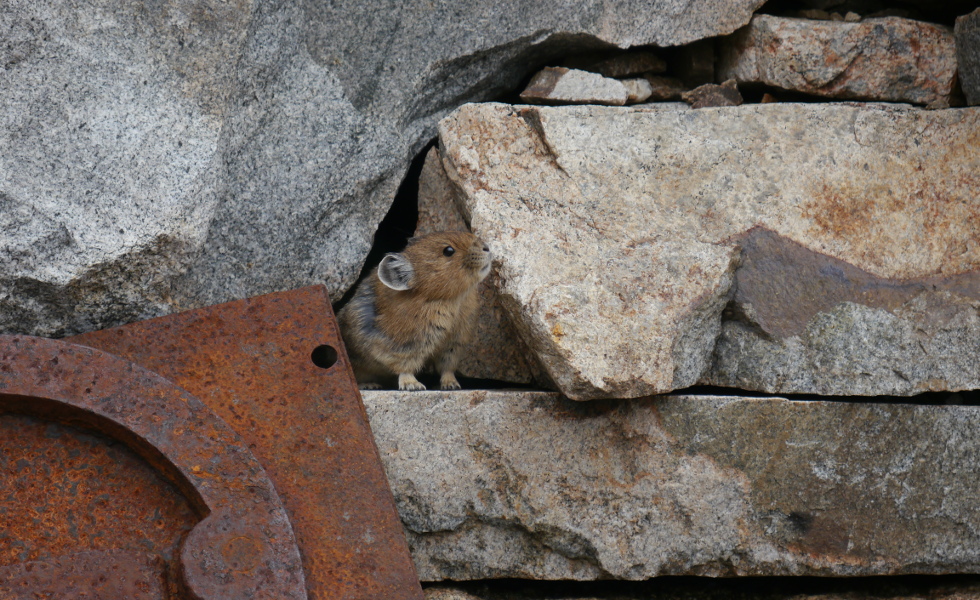 We spent the afternoon in the hut, playing games and reading. I’d brought my own book, but there was a book in the hut, “In the Path of an Avalanche: A True Story,” and I found myself drawn to it.

On our way to the hut, we had encountered a metal plaque on the side a boulder. It had listed the names of eight people. It was dark, we were tired, and we hadn’t given it much thought.

This book was that story, the story of the 1998 avalanche that claimed the lives of eight skiers, right here, near this very hut. It was a sad story, but I read it anyway. I read it for the sake of knowing the history of this area. I read it to keep their memory alive. I read it because, as someone who is addicted to adrenaline, who can’t get enough of the outdoors, and who craves the freedom of being “lost” in wild places, I felt a kinship with these people.

Long after the sun had set, I put the book down and wandered out into the night. I stood on the helipad and looked out over the basin. The same basin those eight were skiing in. The talus slopes glowed silver in the light of the full moon. A peaceful silence hung in the air. The air was crisp and fresh in my lungs. It was so incredibly beautiful; it was hard to imagine it as deadly. I wondered if they had felt the same before the snow had given way. I turned back, grateful for the comfort of the warm lantern light pouring out of the hut windows.

It was noon by the time we packed up, swept out the cabin, dumped the greywater, brought in a bucket of fresh water, and collected a few random pieces of garbage we could take out with us. None of us were excited to leave this cozy little hut in the mountains.

A downhill shot, it didn’t take long before we were back at the truck, bumping our way back to civilization. As reluctant as I was to leave the mountains and go back to “reality” I found myself grateful, not just for the adventure, but the for the safe return.

VIDEOS SHOT AT THIS LOCATION:

morning clouds in the alpine

Want to relax in some of the spectacular locations we visit?

Established in March 3, 1983, Valhalla Provincial Park consists of most of the Valhalla Range of the Selkirk Mountains. It is 49,893 hectares in size with 30 kilometres (19 mi) of…

Hashtag #trashtag, A Story. “I hate people so much,” I sighed as we pulled into a small informal campsite next to the crystal clear Coldwater river. There was garbage everywhere…

Established in 1922, Kokanee Glacier Provincial Park is one of the oldest provincial parks in British Columbia. The Park encompasses 32,035 hectares (79160 acres) of some of the most ruggedly…

A Weekend in Wells Gray

A last-minute change in plans finds us headed to Wells Gray Provincial Park for the weekend. We’ve meant to come here a million times. We drive past the turn a dozen times a year. “It’s…